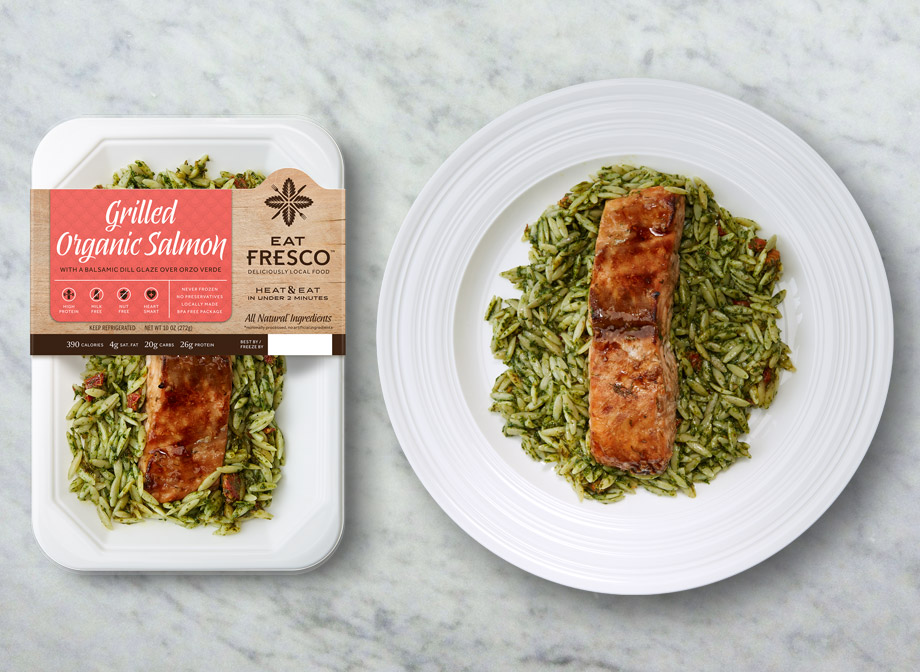 Rob Povolny had a choice to make: pick up stakes in Tampa and transfer to Chicago to keep his job as sales director for a food ingredients company, or take a severance package.

He chose the latter, partly because it was February, but more so because he had an idea simmering – to offer prepared meals that were several cuts above the standard fare, packaged entrees using fresh, locally sourced foods.

For a number of months, he continued to look for a corporate food-industry job while developing his concept. It didn’t take long for the job hunt to fizzle out.

After doing some market research, Povolny and his wife, Tracy started Eat Fresco, which launches in early January with seven products – among them Asian Shrimp Noodle Bowl, Caribbean Jerk Chicken and Roast Cuban Pork Loin – at a handful of local retail outlets.

“There’s this disconnect between what food manufacturers and retailers provide and what consumers want,” Povolny, 38, said. “There’s a lot of skepticism about food out there. A lot of prepackaged meals just aren’t very good.”

The Povolnys, who live on Davis Islands with their two sons, used severance money for startup costs that have thus far come in below $500,000. He collaborated with chef/consultant Kevin Anderson to develop his menu that “covered a broad spectrum of cuisine.” He rented time in an incubator space called Kitchen 24 in Oldsmar, where he put two chef/cooks to work.

He has set up a fledgling distribution system with a refrigerated truck. He brought in Keefe Manwaring of Ninth North in St. Petersburg to do branding and design.

To make good on his fresh-and-natural promise, Povolny had to find the right vendors. He gets his proteins from Turtle Beach in Oldsmar and Niman Ranch, a network of cattle ranchers, and Sammy’s Seafood in St. Petersburg. His produce comes from Global Organics in Sarasota, his grains from United Natural Foods’ Sarasota warehouse.

Povolny directed considerable attention to packaging, and ultimately chose a vacuum-seal pack with a rigid tray that resembles a white plate. Because the entrees microwave so quickly, he has adopted the slogan, “Heat and eat in under two minutes.”

Through his connections in the food industry, Povolny was able to set up a market tests in two Walgreens stores in South Tampa. “Drug stores are becoming the new family convenience stores,” he said, explaining his choice. “They’re diversifying their products, and there’s plenty of foot traffic.”

He’s had a special cooler with LED lighting built to showcase his product with sizzle.

Duckweed Market downtown is on board and Povolny is having discussions with a couple of other independent retailers.

After the launch, he plans to play brand ambassador at the outlets, preaching the brand’s virtues and offering samples and coupons.

Eat Fresco is currently going through the U.S. Department of Agriculture approval process. Povolny expects to be up and running at independents in early January, followed a couple of weeks later with the Walgreens test.

After that? He hopes to be in a position to start raising private equity. A mentor told him to get products on store shelves first.

And after that? “I see Eat Fresco as the first in a bigger line of products that follow in this fresh, organic approach,” Povolny said.

We source the highest quality ingredients from the very best providers to ensure that we are offering restaurant quality dishes.

We have developed fresh, nutritious and flavorful meals, designed to save you time and energy. A fresh approach to lunch and dinner.

Subscribe to receive information on new products, promotions, availability and even coupons!